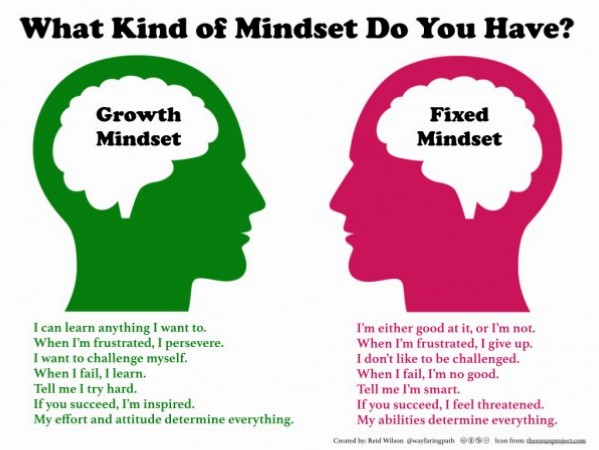 Those were the thoughts I struggled with at 240 lbs some 13 years ago. It’s not until I frankly called bullshit on it all, and focused instead on enjoying the process instead of the elusive final result, that I turned the corner for good.

You talk to yourself in a way that you would never allow anyone else to speak to you. You are harsh on yourself. You are mean spirited. You are cynical. Most of us are.

“The hardest thing to understand is just how easy it is to change it all.”

When you figure out the voice in your head is just replaying a story you’ve created, you can then take control of those thoughts and banish them for good.

I’m reading a book these days by Carol Dweck, which outlines two types of mindsets.

You either have a fixed or growth mindset to varying degrees – but you CAN change.

Growth mindsets tend to learn from criticism rather than ignoring it, overcome challenges rather than avoiding them, and find inspiration in the success of others rather than feeling threatened.

A fixed mindset is quite the opposite – you think you’re doomed to the skill set you have currently, whether it’s in a sport, regarding your intelligence, or your body type. But none of those things are fixed – the research Dweck points to proves that out.

“Gifted” kids with a fixed mindset hold themselves back, while “average” kids with growth mindsets achieve great things because they aren’t afraid to fail and go after the things they want. The same with adults. It’s never too late. A fixed mindset was something I battled with for years – and it still holds me back in some areas of my life.

So this isn’t a cake walk to overcome.

But changing your mindset needs to be one of the first things you work on. You could be given the BEST diet and exercise plan in the world, but if it’s planted in a fixed mindset, the likelihood of success is slim to none.

My clients who get these massive transformations are not miraculously waking up with a new body.

They focus on the process. They focus on showing up to train, even on days where they’d have a valid excuse not to. They focus on sticking to the schedule and “not quitting” even when the going gets tough or the scale indicates a bad week.

Then, one day, they realize the scale is down 50 lbs and they feel like a new person. But, again, it was a belief in the process that got them there. Not a narrow fixed focus on the end result, but a growth mindset willing to overcome every challenge along the way.

This stuff is not limited to fitness by any means. Mindset. Is. Everything.

How Do You Shift to a Growth Mindset?

I’m not big on writing down goals, New Year’s resolutions, or gimmicky self-help gurus. But one way to truly see how your mind is helping or hindering you is to sit down for a few minutes each day and just write down whatever it is you’re thinking. Full credit to Brian Grasso for turning me onto this simple – yet effective – strategy.

This serves a valuable purpose, because until you call awareness to what you are thinking, you often don’t know what you’re thinking. Silly, I know.

Grasso suggests, 9 times out of 10, when you do this journaling exercise a few times a day for at least a week or two, you’re going to see some patterns.

Those are the repeat thoughts you may be having over and over and over again all day long, and you’re not even aware you’re having them. That’s the stuff that needs to be cut loose in order to be successful – in whatever pursuit you’re after.

You have to shift your thoughts – and truly start to enjoy the process of getting in shape, as without some level of enjoyment in the journey, the destination will never be within reach.

Remember those past diets that helped you lose weight fast? They were built on an unrealistic level of will power. You hated every minute of it, which is why you fell off and rebounded back to your starting weight.

P.S. I’m opening enrollment in the next round of my Mansformation Challenge in a couple weeks. Fill out the form here to be given 48 hours early bird notice to apply.