The Ketogenic Diet Is Killing Your Gains

I suspect I’ll get some disagreement from the ketogenic and very low carb communities out there (it’s because your low carb intake is negatively impacting your brain’s serotonin levels, but I digress…)

Yes, low carb diets, the ketogenic diet in particular, does achieve the desired effect initially – weight loss – largely because it helps you achieve a negative calorie balance on a daily, weekly and beyond basis by removing carbohydrates from your diet.

But eliminating a food group entirely – carbs in this case – is not a sustainable long-term strategy for most (you’re going to want to have a piece of cake eventually).

Now, here’s a caveat: I would suggest a low carb approach (not entirely ketogenic as I’ll explain below) is effective for many demographics — obese, sedentary, type II diabetic, and the like.

But if you’ve stumbled upon my site, you likely aren’t in any of these categories, nor are you in retirement doing water aerobics a few times a week as your primary form of exercise…

…Put simply, the ketogenic diet is not for you.

You want to build muscle and burn fat (so you look awesome), and resistance strength training changes your dietary needs completely.

A good analogy is gas for your car.  If you never push your car beyond the speed limit, throwing more fuel in it than it needs to get the job done does more harm than good. OK, I suck at analogies, but essentially if you load up on carbs in a sedentary state, it spills over the side (into your love handles, beer gut and double chin).

However, if you put the pedal to the metal day in and out, you have to fill it up often.  If you don’t, you will run out of gas.

So, those in pursuit of muscle (who train hard) need to fuel accordingly. Plus, not only does training performance suffer but training hard without carbohydrates can deplete testosterone production and metabolism over time.

According to a study referenced by Jason Ferruggia, a low-carb diet has been shown to increase cortisol and reduce testosterone levels.

Let me tell you a story…

Thinking I knew it all some 7 years ago, with a “more is better” mentality, I eliminated carbohydrates from my diet entirely…

Turns out that wasn’t very good for my efforts to build muscle, nor my digestive system.

Long story short, I ended up setting myself back MONTHS with a colon issue (I’ll spare you the dirty details, but you get the picture)

But anyhow…as this relates to you, I also tanked my testosterone levels to that of an 80 year old man in the process. (Blood work results enclosed in the T boosting cheat sheet here)

It took a few months of introducing carbs back in and making these 9 other changes to my lifestyle to bring my testosterone levels up to high normal. 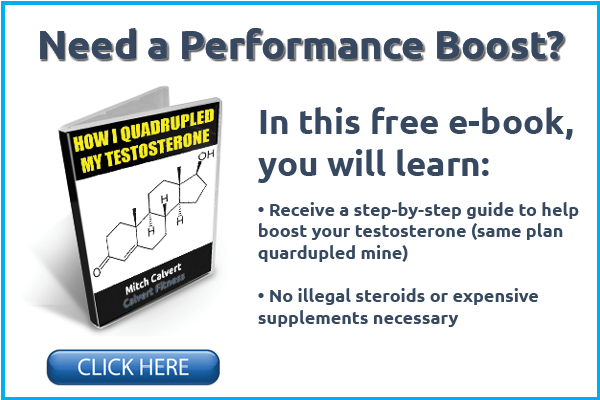 Anyway, what’s the alternative to the ketogenic diet?

Which is the ability to switch from one fuel source to the next; from fats to carbs and carbs to fat depending on your activity levels.

To get the best of both worlds, skip the carbs at breakfast and during the early part of your workday. Instead, opt to replace carbs with healthy fats and keep your protein intake constant.

This means something like a three-egg omelet with spinach instead of a heavy carb-laden breakfast of pancakes and waffles (you can maybe eat those later in the day – see below).

That said, we don’t want to catabolize muscle entirely and end up looking like a dude fresh off Weight Watchers. When your workout comes around, introduce carbs to maximize muscle retention/gains and recovery.

This isn’t particularly new info, but one study found that 50 grams of pure carbohydrates in a workout drink consumed during a resistance training session completely eliminated cortisol (muscle protein breakdown) elevations compared to a control drink.

Subjects within this study with the lowest cortisol – and the greatest muscle gains – were entirely from the group who drank the carb drink, whereas subjects tested with the highest cortisol showed the least gains. One placebo participant on the control drink even lost muscle size during the study. Yikes.

As Mike T. Nelson explains, metabolic flexibility allows you to use fat at a higher rate (better fat loss) while still maintaining the ability to use carbs (better performance).

This is where the promised land lies.

After all, we want to look lean, not just skinny with a bag of bones where muscle should be. After all, muscle is a major player in energy balance due to its metabolic activity (1 lb of muscle burns 3x the calories as 1 equivalent lb of fat), and it’s a storage facility for carbs in muscle glycogen (increased insulin sensitivity). NOTE: That means you can eat more!

Plus, ask yourself this: Why bust your butt in the gym if you aren’t going to fuel your muscles to grow from all those efforts?

According to Nelson’s piece at Examine.com, research has shown that those who are on a very low carb diet for prolonged periods of time demonstrate a reduced ability to fully use them during exercise.

Your time in the gym should be focused on building muscle. Fat loss can be achieved the other 23 hours of the day through diet and low intensity activity (since you’re not eating carbs at those times, fat is utilized for energy <LIGHT BULB MOMENT>).

But when you’re in the gym or playing a sport, you want to fuel your training to the highest degree, and this requires carbohydrates to produce high power outputs and speed, not to mention the anti-catabolic effects of carbs (see cortisol study referenced above) are a necessary component to recovery and muscle gains. It’s all about the gains.

If training without carbs in a fasted state made no difference, studies like this wouldn’t exist. It showed weight training in a fasted state causes a net-negative protein balance in muscle tissue; meaning muscle protein breakdown wins out over muscle protein synthesis in this scenario. In layman’s terms, you’re breaking down muscle tissue and not compensating for that breakdown. You’re chasing recovery the rest of the day as a result. Meanwhile, ingesting protein around training time induces a positive protein balance by increasing MPS and suppressing MPB, according to this study.

To be fair to both sides, there’s a study showing a ketogenic diet led to a greater increase in lean body mass than a carbohydrate-rich one. But the carbohydrate group was eating too little protein at 20% of calorie intake (with 55% of their diet coming from carbs alone) to be a fair comparison IMO.

I’ve been in the trenches for awhile (some 13 years) and tried it all.

For guys (and gals) looking to build muscle, drop fat and look sexy, metabolic flexibility is the promised land. It’s a moderate approach that doesn’t swing the pendulum too far in one direction, and it simply works. Try it for yourself.

If you skipped the article, here’s the take home: If building muscle is a priority of yours, a ketogenic diet is not the optimal environment to fuel hard resistance training workouts (which = muscle gain). Instead, utilize metabolic flexibility by getting your body in a state where it can seamlessly switch energy sources depending on your activity levels (use primarily fat when sedentary and carbs when active).

My clients have lost more than 1,200 pounds (mostly fat) in 2015. Do you want in on the action? Fill out an application here and apply for a free fitness consultation call.