Your brain is constantly looking for ways to save energy. Research shows that one way it does this is by turning activities into habits.

New research by Duke University scientists suggests that a habit leaves a lasting mark on specific circuits in the brain, priming us to feed our cravings.

Published online Jan. 21 in the journal Neuron, the research deepens scientists’ understanding of how habits like smoking, sugar consumption and other vices manifest in the brain.

In fact, as much as 40% of the actions you perform each day are based on habit and not on conscious decisions, managed by the basal ganglia, a part of your brain that can function normally on auto pilot even when the rest of the brain is damaged.

Even a complicated act that demands concentration at first, like backing out of the driveway, eventually becomes an effortless habit you could do in your sleep.

According to author Charles Duhigg in the Power of Habit, any habit can be broken down into a three-part loop: 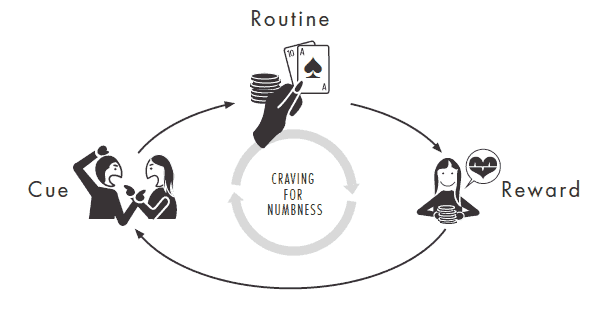 First, you sense an external cue, say, your boss stresses you out at work. This creates an overall spike in your brain activity as you decide which habit is appropriate for the situation.

Next comes the routine, meaning the activity you’re used to performing when faced with this particular cue. You march outside and inhale a cigarette to get your mind off things.

Finally, you get a reward: a feeling of success and, in this case, a rush of dopamine from the nicotine in the cigarette. Your overall brain activity increases again as your brain registers the successful completion of the habit and reinforces the link between the cue and routine.

Habits are incredibly resilient: in some cases, people with extensive brain damage who could not even remember where they lived could still adhere to their old habits and pick up new ones.

Unfortunately, this resilience means that even if you kick a bad habit, like smoking, you will always be at risk of relapsing.

But, there’s good news. Instead of trying to eliminate bad habits “cold turkey” you should work to replace bad habits with good ones that offer a similar reward.

1. To change a habit, substitute the routine for another.

Ask any smoker looking to quit: when the craving for nicotine hits, it’s hard to ignore. The trick is to respond to the craving, but with something other than smoking.

This is the golden rule of changing any habit: don’t resist craving, redirect it. Keep the same cues and rewards, but change the routine that occurs as a result of that craving.

The dopamine hit you get from smoking can be achieved from exercising. Sure, the gym may not sound fun, but that’s due in part to the associations you’ve built in your head about it. Once the habit is in place, you can go on autopilot. Once the workout is done, the reward of feeling good, dopamine rush, is all the same as smoking.

How do you replace one routine with another? Maybe it’s joining a workplace weight loss challenge where you’ll be motivated to exercise during your breaks. Maybe it’s enlisting a trainer who will hold you accountable to working out when you’d rather be smoking. Whatever it is, make it something that gets you out of your regular routine.

“Changing a habit on a vacation is one of the proven most-successful ways to do it,” Duhigg said in an interview with NPR. “If you want to quit smoking, you should stop smoking while you’re on a vacation — because all your old cues and all your old rewards aren’t there anymore. So you have this ability to form a new pattern and hopefully be able to carry it over into your life.”

2. Change can be achieved when you believe in yourself.

Though bucking routine can help you initially change your habits, stressful circumstances can cause relapses.

Research indicates that the difference between relapses and continued adherence to your new habit is belief in yourself.

Believing in the possibility of change for yourself makes you stronger in the face of stressful life events. Which is why mindset is the first thing you should work on when building new habits.

Changing your mindset needs to be one of the first things you work on. You could be given the BEST diet and exercise plan in the world, but if it’s planted in a negative mindset, the likelihood of success is slim to none.

My clients who get these massive transformations are not miraculously waking up with a new body.

They focus on the process. They focus on showing up to train, even on days where they’d have a valid excuse not to. They focus on sticking to the schedule and “not quitting” even when the going gets tough or the scale indicates a bad week.

When you figure out the voice in your head is just replaying a story you’ve created, you can then take control of those thoughts and banish them for good.

3. Change can be achieved by focusing on small, daily habits and achieving small wins.

The reason minor habit changes work is because they provide small wins, meaning early successes that are fairly easy to attain. Achieving the habit helps you believe that change in other spheres of life is possible too, starting a cascade of positive changes.

This works best when you limit yourself to working on one habit at a time. If you focus on just one new habit, they’ll become second nature. Start with just 10 minutes of exercise each day and only progress up from there when 10 minutes is a part of your routine.

4. Change is more likely when you tell your friends about it.

You will benefit when you tell lots of people your goals. Tell your friends when you want to give up overeating or binging. Your friends will keep you accountable, and ask how things are going.

If your friends get jealous, or insecure on your behalf, or afraid of the change, you need to get better friends.

As the saying goes, you are the average of the five people you spend the most time with.

If you hang around five healthy people who take care of themselves, you will become the sixth.

So try very hard to ensure your social circle matches your goals, and your new habit will be easier to maintain.