A recent article in the Globe & Mail adds fuel to the growing debate about whether taking in micronutrients (vitamins) in pill form – in “supraphysiological” doses nearly impossible to get through diet alone – actually does more harm than good.

A Queen’s University study, cited in the article, tested 16 men before and after a four-week sprint-interval training program. The group who took a resveratrol supplement saw smaller improvements in anaerobic power and impaired fat-burning during exercise compared to the group that did the exercise alone with no supplemental “advantage.”

As a second example, the article cites a 2008 Spanish study that found combining exercise with 1,000 mg per day of vitamin C through pill form led to smaller gains in aerobic fitness-boosting mitochondria than exercise alone. Similarly, a German study in 2009 found a combination of 1,000 mg of vitamin C and 400 IU of vitamin E blocked the improvements in insulin sensitivity you’d normally get from exercise.

What should you take from all this? 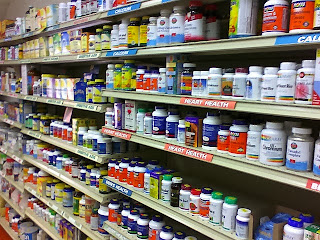 If you aren’t on a severely calorie restricted diet, a well-rounded diet that incorporates plenty of micronutrients the natural, absorbed-through-food way will get the job done.

I see young 20-somethings touting around a pill box full of tablets only their grandparents could rival, and that worries me. Your body is programmed to digest food and extract macronutrients (protein, carbs etc. for fuel) and micronutrients (vitamins and minerals). When you throw in a high dose of a processed vitamin pill, your liver and kidneys have to process that first, and as the studies above suggest you may be doing more harm than good anyway. Not to mention the fact you’re throwing good money down the drain.

**Instead of going cheap on the foods you eat and spending wads of cash at the local supplement shop, invest in high quality foods instead!

You are what your food has eaten. I am a staunch believer in natural sources of fat soluble vitamins, and you will get way more Vitamin D from a free range egg, as the hens get more sunlight, than your run-of-the-mill $2/dozen bare bones variety that lives its life confined to a cage. In addition, free range eggs give you twice the Omega 3’s (although I have seen as much as 20 times more Omega 3), and 7 times more beta carotene. That’s just one example.

Vitamin C can be had from a variety of fruits and veggies, and Vitamin E is found in abundance in wheat germ, green leafy veggies and grass fed beef. Make the effort to consume high quality foods and you won’t need a medicine cabinet full of herbal supplements.

Direct from the G&M article: “But it should be clear by now that just because something is “good for you,” extracting its essence and ingesting 100 times more of it won’t be 100 times better for you – and in some cases, may actually be worse.”

Note: I’m not 100% anti-supplement. I believe in adding in a daily dose of Vitamin D during the long winter months when you leave work in darkness, and if your diet is lacking in seafood, fish oil supplements in moderation can close the gap, but the take home point here is to focus on a diet rich in quality foods first and foremost. Thinking you can make up for poor diet by popping pills is not a winning formula. I believe a lot of health problems could be nipped in the butt early if diet and exercise is preached before medicine, but don’t tell Big Pharma or the billion dollar health supplement industry that.